Seventeen-year-old Ana Miron grew up in a small town in central Moldova. She has five siblings and her parents continuously struggle to support them all.

Due to high unemployment rates, Ana’s mother stays at home to take care of the family. They all do their best to get by and live off produce from their garden and take care of their animals.

During the farming season, Ana’s father works as a contractor helping anyone out that needs an extra set of hands on construction sites or with farming projects.

However, currently he has no work. Ana is the eldest child, her younger sisters and two younger brothers are all very close. 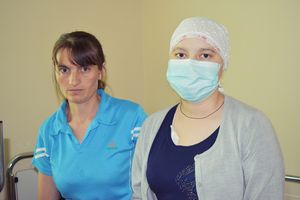 They pitch in where necessary and despite their many hardships, they remain a united and strong family unit. Ana dreams of becoming a professional painter and decorator. In persuit of this dream, last year she enrolled into a vocational school. She remembers that time as an exhilarating and very exciting one. She felt as if nothing stood in the way of her achieving her dreams.

During her first year of training, Ana began to feel ill one day in early April at school. She grew nauseous and dizzy.

Her classmates saw her faint and hit the ground. Luckily there were many people nearby to get help. Ana was taken to the children’s ward and the doctors noted her high fever but found no explanation for her symptoms.

Meticulous blood tests followed, and led doctors to believe she had cancer. Within a week she was referred to the oncology institute and hospitalized once the diagnosis of leukemia was confirmed. 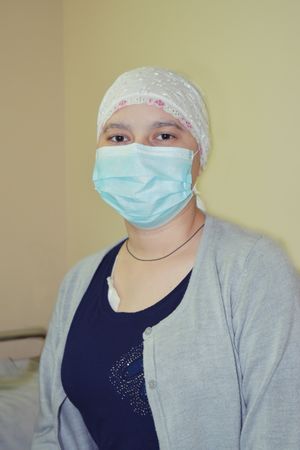 Unfortunately the price of treatment for Ana was too high. Standard health insurance doesn’t guarantee treatment in Moldova. It usually only secures a bed for patients, families must club together and obtain everything from bed sheets to medicines.

In Ana’s case, her family asked everyone they knew for help and were able to collect 300€ in total. For the low-income family this is a large sum of money and will certainly help Ana’s recovery, however, it is not enough for her chemotherapy treatment.

In an attempt to pay for Ana’s stay in the cancer hospital in Chisinau, the capital of Moldova, the family sold their calf as well as all their best furniture.

This means that Ana’s younger sister will be unable to start vocational training this coming autumn as planned. The entire family has been hit hard by Ana’s diagnosis, not only financially but emotionally, too.

When we spoke to Ana’s mother, Sonya, she confessed that she is feeling guilty of stealing the future, food and education from her children but it is a hard choice that she must take if she wants to save Ana. 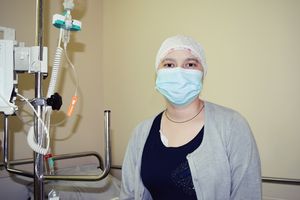 Their efforts have been monumental, the family have given up all they have, but it still isn’t enough. Ana needs chemotherapy to help her fight leukemia, without which her chances of recovery are near to none. The bright 17-year old decided to start a crowd-funding campaign online to cover the medical fees. She sent the campaign it to all her friends and family, asking them to share it.

Within just a few weeks she had met her goal of around 1,000€ and was able to buy the right chemotherapy.

Ana remained in the cancer hospital in Chisinau for the course of her treatment. She suffered badly from the side effects and she had to take the chemotherapy in smaller doses.

Being the brave young girl that she is, she got through it. The doctors now needed to see how effective it had been. It was around this time that we heard from our partners, Coram Deo, in Moldova reporting that she needed special blood tests to analyse how, and if, the chemotherapy had worked. These tests are unavailable in Moldova, the poorest country in Europe.

We were ready to help in any way possible. Ana had already taken matters into her own hands once. So, we funded her tests and her trip to Romania where Ana would receive better treatment and more accurate blood test results.

Since returning from her trip, Ana’s doctor is only partially satisfied with the results because the cancer has not disappeared. Luckily, however, they were able to determine exactly the type of treatment she needs to continue due to the accuracy of the test results.

Her father, who accompanied her to Romania, said he is “blown away” by the support of others that are helping his daughter recover. Her story won’t stop here for us as we hope to continue to support Ana and other children suffering from cancer.

Read more about our work:

Sizetsiana gets an irregular mole checked

Recently out of surgery Sizetsiana and her mother, Tatiana, are waiting for pathology results to confirm or not whether her mole is malignant. Resources of chemotherapy in Moldova are hard to come by and expensive. If the results indicate a cancer then they will have a difficult time ahead of them like many people in Moldova do.

The ghanan charity Breast Care International takes it upon themselves to spread the word throughout Ghana, about breast cancer, with as many women as possible. Achieving this through raising awareness about the risks of cancer for women and campaigning for early detection and prompt treatments.