When looking at Nouhoum- this smiling 14 year old, one would never guess the ordeal he has suffered the past year. Nouhoum has had to endure the pain of having a massive lymphoma in his groin. He finally approached the Koutiala Hospital for Women and Children, when the tumour on his groin had grown bigger than the size of a football! The tumour had caused him not only large discomfort and pain, but immense shame for him and his family due to its size and odour. Luckily in Koutiala the malignant nature of his tumour and operated on immediately. Dr Dan Kim the paediatric surgeon operated on Nouhoum and successfully removed his enormous tumour. 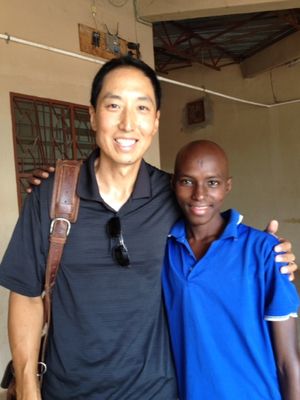 “Thank you to Krebs Allianz for your generosity and partnership with us in Mali! Childrens' lives are being saved through you!”– Brett MacLean- MD Koutiala Hospital for Women and Children

Read more about our work:

ANF´s institutional mission is to acquire necessary resources directly or through strategic partners to reduce the impact of poverty on the lives of the most vulnerable population in Nicaragua. These sustainable non-profitable resources are donated in an efficient, effective and transparent manner, with the assistance of a network of local partners.

Gigson and his mum are a strong team together

In March 2008, Gigson was diagnosed with Leukemia. Life since then has been a blur of traveling and treatments. The two of them look remarkably composed compared to the actual chaos of their lives. Gigson’s smile is infectious he’s seven years old but the self-confidence he projects makes him seem older.